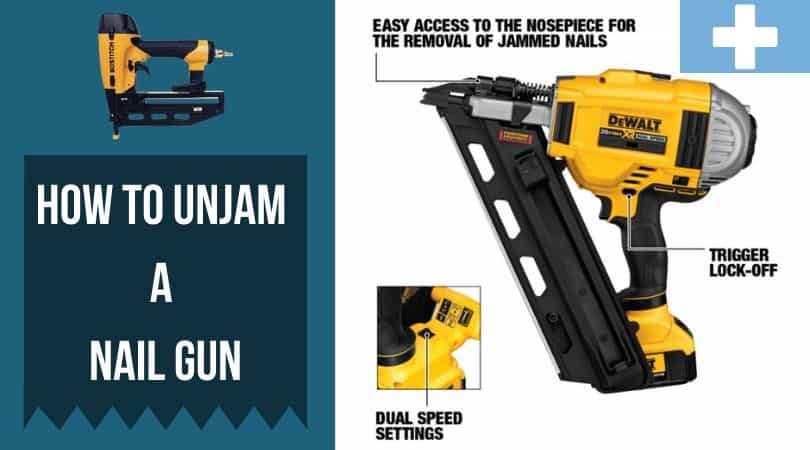 I’m sure you know what nail guns are used for, right? It’s used for different kinds of construction work. A nail gun is a power tool used for driving nails into different materials or surfaces.

And owning this kind of tool also comes with lots of maintenance issues. One of the most frustrating problems that will arise is when your nail gun gets jammed, and it doesn’t work while you’re busy on a project.

Taking it to a professional or a hardware store to get it fixed is very costly and time-consuming since they’re going to pile your tool with other damaged ones and work on them altogether.

But if you knew how to unjam a nail gun yourself, then you wouldn’t have to worry about such things. Thus, with our help in this article, you’ll get to know exactly that. Let’s get right to it!

Reasons a Nail Gun Could Get Jammed

Despite what kind of nail gun or nailer you have, they tend to get jammed over time if they’re not regularly maintained. And there are numerous reasons why a nail gun can get jammed.

To solve this jamming problem, you’ll obviously have to go to the source of the problem and find out what made it jam in the first place. Some of the likely reasons are given below: 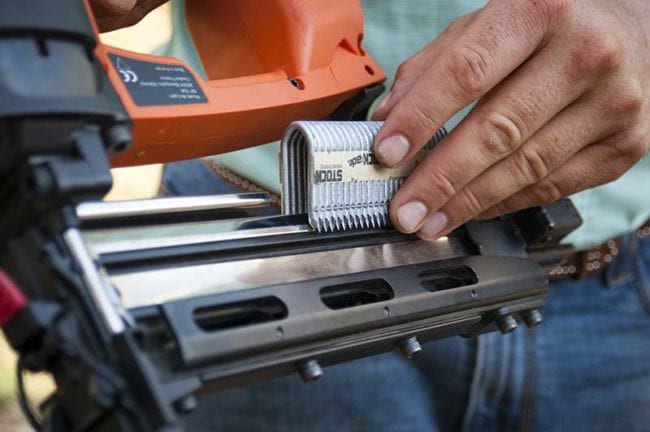 How to Unjam a Nail Gun

When you’re about to unjam a nail gun, you need to take some safety precautions to protect yourself in case an accident happens with your nail gun. After all, it’s still a dangerous power tool that shoots sharp nails.

It’s best to be careful and wear industrial goggles or glasses and industrial gloves while working with your damaged power tool.

So, to take care of this tool and get it unjammed, you need to follow a few steps. And those very steps are given as follows:

The first step is to make sure you’ve turned off the main power line to this power tool. Then check to see no air is stuck in it and then go ahead and take out the batteries or its cord. By doing this, you’ve ensured your own safety from it accidentally turning on.

Now you need to place a cloth on a flat surface. Make sure it’s white so you can see everything clearly. Then place the nail gun on top of the white cloth. Make sure the nail gun isn’t facing toward you, to be safe.

Next, you need to open the nail gun barrel and then find its release switch. This is the part that lets you release the nails that are stuck inside. Although these kinds of switches might not be available in all types of nail guns. In that case, check carefully inside the barrel to see if there really is a nail stuck in there.

In some nail guns, there are two nose bolts on the front of the nailer. You need to separate this nose from the nail gun’s magazine or lift its nose latch to release the nose plate on the front.

Give your barrel a quick inspection and see what’s really causing the jam. For this, you need to check a few things. Check the magazine for any blockages on top. And check that the driver blade is in rest. See if there are any paper or metal components jammed on the top of the tool.

After checking all that, if you see a nail stuck in there, then you can proceed to the next step.

Once you do find a stuck nail in the barrel of the nail gun, you can either pull it out with your own fingers, use a pair of pliers or use another nail to get it out. This step is time-consuming, and you will need a lot of patience and persistence, but eventually, the nail will come out.

Don’t forget this step is only needed if your nail gun doesn’t have a release switch. If it does have one, you can just use that switch to let the nails drop off. In some other models, there may be a flip-style mechanism on the nailer’s nose. This allows the magazine to open to let the nails out.

After you’ve gotten the wrongly filled nails out, you can start refilling the nails in the correct way.

Now you can safely close the barrel and connect the cord or put the batteries back on for power and then begin your project again.

We hope that after this article, you’ll be able to get a better understanding of your nail gun’s inner features, how they operate, and how to maintain them.

The work of unjamming your nail gun by yourself might seem like a hard process, but if you follow the above steps, then you might get the hang of it, and you’ll easily be able to maintain it free of cost and in no time.

As an Amazon Associate I earn from qualifying purchases.